Eunos (Jawi: اييونوس; Chinese: 友诺士, Tamil: யூனுஸ்), is a subzone located in Geylang in the Central Region of Singapore. The vicinity is served by both Paya Lebar and Eunos MRT stations.

“Eunos” is also the name given to a street called Jalan Eunos in Malay which spans the area.[2]

Geylang (Chinese: 芽笼, Tamil: கேலாங்) is a planning area and township located on the eastern fringe of the Central Region of Singapore, bordering Hougang and Toa Payoh in the north, Marine Parade in the south, Bedok in the east, and Kallang in the west.

Geylang is known perhaps most infamously as a red-light district, particularly the areas along Geylang Road. Geylang is also where one of Singapore’s oldest Malay settlements, Geylang Serai, is.[4]

Kembangan is a subzone and residential precinct located in the town of Bedok in the East Region of Singapore. It consists largely of private residential areas and a small public housing estate along Lengkong Tiga.

Kembangan is served by limited amenities like the Kembangan Plaza, which mainly consists of tuition centres, as well as shophouses around the estate. The social welfare of residents are catered for with facilities like the Kwan-In Welfare Free Clinic and the Moral Home for the Disabled in the area. The estate is served by the Kampong Kembangan Community Club, which also serves the wider Kembangan-Chai Chee constituency in the Marine Parade Group Representation Constituency. The Siglap Park Connector which runs to either the Bedok Reservoir Park or the East Coast Park cuts through the area too. There are more amenities located in the nearby Chai Chee and Eunos estates.

The area falls under the jurisdiction of the Kampong Kembangan Neighbourhood Police Post (NPP), which is part of the Bedok Police Division, and the 2nd Singapore Civil Defence Force DIV HQ.[4] 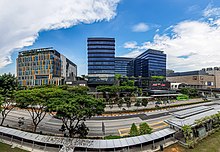 Paya Lebar is a planning area located in the East Region of Singapore, bordered by Hougang to the west, Sengkang to the northwest, Tampines to the east, Bedok to the south and Pasir Ris to the north.

As part of the Singapore Urban Redevelopment Authority’s (URA) Master Plan 2014,[1] Paya Lebar Central[2] was identified as one of the five growth areas. It was since earmarked as an up and coming commercial hub, in line with the wider decentralisation strategy to ensure the city’s sustainable growth. Through its participation in the pilot Business Improvement District (BID) programme, stakeholders will be able to work together to form a collective vision that taps into the creativity and resources of everyone to strengthen the district.