Hougang is a planning area and mature residential town located in the North-East Region of Singapore. The town is the most populous in the region, being home to 247,528 residents as of 2018.[5] Hougang planning area is bordered by Sengkang to the north, Geylang and Serangoon to the south, Bedok to the southeast, Toa Payoh to the southwest, Paya Lebar to the east, Ang Mo Kio to the west and Bishan to the southwest. 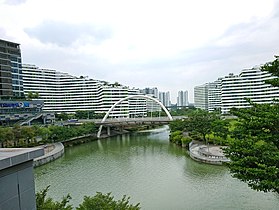 Punggol, alternatively spelled as Ponggol, is a planning area and new town situated on the Tanjong Punggol peninsula in the North-East Region of Singapore. The town directly borders Sengkang to the south and shares riverine boundaries with the planning area of Seletar to the west and Pasir Ris to the east. Bounding the town to the north and north-east is the Straits of Johor, with Coney Island included as a part of the Punggol planning area.

Under the Punggol 21 initiative, plans to turn the area into a new residential town were announced in 1996 and development of the town started in 1998. Due to the Asian financial crisis in 1997 and the financial troubles within the construction industry in 2003, the plan did not fully materialise. In 2007, a new initiative, the Punggol 21-plus plan, was introduced to redevelop the area into a waterfront town. Punggol is divided into 11 districts, namely, Coney Island, Matilda, Northshore District, Punggol Central District, Punggol Field East, Punggol Field West, Punggol Downtown District, Punggol Point District, Canal District, Crescent District and Waterway West District.[4]

Sengkang is a planning area and residential town located in the North-East Region of Singapore. The town is the second most populous in the region, being home to 232,100 residents in 2017.[2] Sengkang shares boundaries with Seletar and Punggol in the north, Pasir Ris and Paya Lebar in the east, Hougang and Serangoon to the south, as well as Yishun and Ang Mo Kio to the west.

Originally a fishing village, the area is undergoing rapid development under the ambition of the Housing and Development Board (HDB) to transform it into a fully mature housing estate.[4][5]