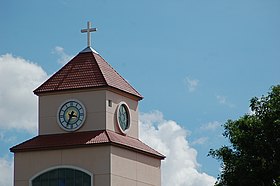 Prior to urbanization, the area, much like other rural districts in Singapore at the time, was largely undeveloped, being mainly used for agricultural purposes, with uninhabited plots of land usually covered in dense secondary forest or swamps.[10] Ang Mo Kio was subsequently redeveloped by the Housing and Development Board in 1973 as their seventh satellite town and the first to be built in metric dimensions,[2][10][11] being fully completed by 1980. The first three town councils in the country were established in Ang Mo Kio in 1986, as part of a pilot project to better serve residents of HDB new towns. The concept eventually became adopted under the Town Council Act of 1988 which today, remains as the second-level of administration in Singapore.[12][13] 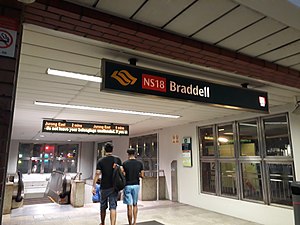 Braddell MRT station (NS18) is an underground Mass Rapid Transit (MRT) station located on the North South Line in Toa Payoh, Singapore. Unlike the other stations on the NSL (apart from Canberra), the station has side platforms due to engineering constraints. Located underneath the traffic junction of Lorong 1 Toa Payoh and Lorong 2 Toa Payoh, Braddell station primarily serves the estates in the northern part of Toa Payoh New Town.

Opened on 7 November 1987, Braddell station is one of the five stations that collectively make up Singapore’s oldest MRT stations.

Thomson is a relatively narrow area stretching from Novena in the Central Region of Singapore up north till Yishun. The area is mainly located within the central catchment area where some of Singapore’s reservoirs are located, including MacRitchie Reservoir, Upper Peirce Reservoir and Lower Peirce Reservoir.[1]