Seletar is an area located in the north-east of Singapore. Its name can also refer to the Seletar Planning Area (as defined by the Urban Redevelopment Authority), situated in the North-East Region of Singapore. The place name was derived from the Malay subgroup who were indigenous to the area, the Orang Seletar. It shares boundaries with the planning areas of Sengkang to the south, Punggol to the east, Yishun and Simpang to the west, as well as the Straits of Johor to the north.

Formerly Royal Air Force Station Seletar Royal Air Force military airfield site, the area now houses a new S$60 million Seletar Aerospace Park that spans 140 hectares. The aerospace park is expected to be completed in 2018 and will house industries specialising in aircraft maintenance and repair services.[3][4] There are future plans to transform Seletar into one of the Singapore’s regional centres, along with Jurong East, Tampines and Woodlands. 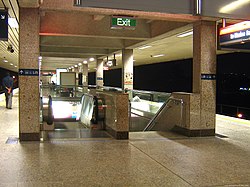 Yio Chu Kang /joʊ tʃʊ kʌŋ/ is a sub-urban area in the northeast of Singapore, with proximity to the Ang Mo Kio, Lentor, Seletar and Sengkang areas. Deriving its name from the Yio Chu Kang Village, it is still known for lush greenery and low-density housing with high-rise public housing in its southern fringes.

The name Yio Chu Kang, similar to Choa Chu Kang and Lim Chu Kang did not come from names of famous people unlike many other road names in Singapore. The word ‘Kang’ – means river, while ‘Chu’ was apparently a clan. The word ‘Chu’ itself means “owner” or “land”. The clan was hence named Kangchu because it was controlled by the Chu clan and they were situated around a river. The north of Singapore was split and given to different leaders of the Kangchu clan, and they took the name of the leader. Hence the names Yio Chu Kang, Lim Chu Kang and Choa Chu Kang.[1]