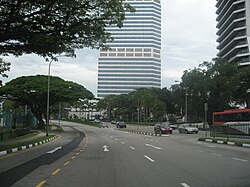 Alexandra is a subzone region located in the town of Bukit Merah, Singapore. The region comprises two non contiguous neighbourhoods: Alexendra Hill and Alexendra North. It is located along the road which the place had its name derived from, at the eastern border of the Queenstown district. Alexandra North, which refers to the precinct near Redhill MRT station, consists mainly of condominiums together with a park. Alexandra Hill, which is often referred to as Brickworks Estate or Rumah Tinggi, mainly consists of HDB flats and is also home to an IKEA showroom. There is also a shopping centre in the district which recently opened its doors in 2016, Alexandra Central, beside the IKEA building. There is also the historical Alexandra Hospital, located near the region. 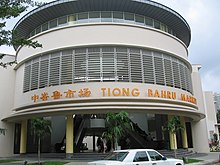 Tiong Bahru is a housing estate located within the Bukit Merah Planning Area, in the Central Region of Singapore. Tiong Bahru was constructed in the 1920s by the Singapore Improvement Trust, the predecessor to the Housing Development Board and an entity of the British colonial authority providing mass public housing in Singapore and is the oldest housing estate in Singapore. The main estate consists of 30 apartment blocks with over 900 units of two to five rooms. There are also high-rise Housing and Development Board (HDB) flats and condominiums along Boon Tiong Road, Jalan Membina and Kim Tian Road which surround the main estate.

Since the mid-2000s, Tiong Bahru has undergone rapid gentrification and the neighbourhood has become synonymous with trendy cafes and indie boutiques amid pre-war architecture.[1]

Queenstown is a planning area and satellite residential town situated on the south-westernmost fringe of the Central Region of Singapore. It borders Bukit Timah to the north, Tanglin to the northeast, Bukit Merah to the east and southeast, as well as Clementi to the northwest and west. Its southern and southwesternmost limits are bounded by Selat Pandan.[4][5]

Developed by the Singapore Improvement Trust in the 1950s and subsequently by the Housing and Development Board in the 1960s, Queenstown was the first satellite town to be built in the country. Most apartments within the township consists of simple one, two, or three-room flats, typically in low-rise, walk-up blocks. Major development work was carried out during the first Five-Year Building Programme between 1960 and 1965. A total of 19,372 dwelling units were constructed between 1952 and 1968.[6]