Keppel Road is located in the Tanjong Pagar sub-zone of the Bukit Merah Planning Area within Singapore’s Central Region.1 The road was developed through the reclamation of mangrove swamps and mudflats that stretched from Tanjong Pagar to Telok Blangah, and was named after Captain (and later Admiral) Henry Keppel (1809–1904).2
The Keppel MRT station on the Circle Line will be located along Keppel Road, near Keppel Terminal and Keppel Distripark. The station is expected to be completed by 2025.21

Mount Faber, formerly Telok Blangah Hill, is a hill about 94 metres (308 ft.) in height, located in the town of Bukit Merah in the Central Region of Singapore. It overlooks the Telok Blangah area, and the western parts of the Central Area. The summit is accessible by Mount Faber Road or Mount Faber Loop via Morse Road, but there are many footpaths or trails leading up the hill. The main paths are: Marang Trail which leads from Marang Road at the Harbourfront MRT station (Exit D) and the Southern Ridges Park Connector which connects from Telok Blangah Hill Park, Kent Ridge Park and Henderson Waves.

Sentosa Island,[2] also known as Sentosa, is an island located at the Central Region, Singapore. It was once used as a British military base and a Japanese prisoner-of-war camp. In 1972, the island was renamed Sentosa and was planned to be a popular tourist destination. It is now home to a popular resort that receives more than twenty million visitors per year.[3] Attractions include a 2 km (1.2 mi) long sheltered beach, Fort Siloso, two golf courses, the Merlion (now closed), 14 hotels, and the Resorts World Sentosa, which features the Universal Studios Singapore theme park and one of Singapore’s two casinos. 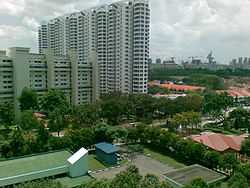 West Coast is a subzone located in the town of Clementi, the western part of Singapore. The subzone currently lies in the West Coast GRC. West Coast was created out of reclaimed land in the 1970s. Despite both being created out of reclaimed land, the east became a recreational area but the west was filled with industries. The western part of West Coast is largely industrial but the eastern and central parts of the area are mostly filled with private housing along with a single HDB estate.[1]