By User:Sengkang – Own work, Copyrighted free use, https://commons.wikimedia.org/w/index.php?curid=1424658

Dover is a relatively small neighbourhood of Singapore, located in Queenstown. It is bordered by Ghim Moh to the north, Kent Ridge to the south and southeast, one-north and Queenstown to the east, Commonwealth and Holland Village to the northeast Clementi to the west and West Coast to the southwest. It is often a noted location due to the sheer number of educational facilities it holds, while lying in a zone between the Central Area and near industrial zone in the vicinity of Jurong. 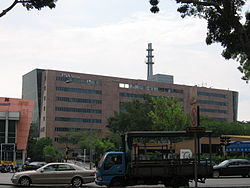 Named after a long stretch of sandy beach along the southwestern coastline of Singapore, the Pasir Panjang area developed around a main road of the same name that used to hug the coastline prior to land reclamation works. In the early days, the area was occupied by agricultural settlers who planted crops on Pasir Panjang Ridge, as well as Malay fishermen and wealthy Chinese businessmen who lived along the coast. Today, it is a residential, recreational and industrial area. From 1955 to 1988, Pasir Panjang was also a parliamentary electoral constituency.