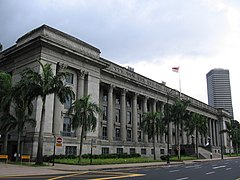 The City Hall (Malay: Dewan Bandaraya; Chinese: 政府大厦; Tamil: நகர மண்டபம்) in Singapore is a national monument gazetted on 14 February 1992. It can be found in front of the historical Padang and adjacent to the Supreme Court of Singapore, it was designed and built by the architects of the Singapore Municipal Commission, A. Gordans and F. D. Meadows from 1926 to 1929. A flight of stairs takes visitors from the Corinthian colonnade to the main building. The building was constructed to replace several houses designed by architect G.D. Coleman. It was first known as Municipal Building until 1951 when Singapore was granted city status by King George VI.

High Street, located in the Downtown Core of the Central Region, stretches from Hill Street to North Bridge Road.1 Cleared from part of the jungle near the shore in 1819, it was the first street laid out in Singapore.2 The short street is appropriately named as it sits on high ground and thus not prone to flooding, as other areas frequently were.3 From the turn of the century until the 1970s, High Street was a popular shopping haven of the elite.4 The original street was much longer and used to run from Hill Street all the way to St Andrew’s Road. In 1999, the stretch of the street between North Bridge Road and St Andrew’s Road was renamed Parliament Place.5 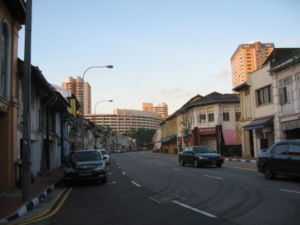