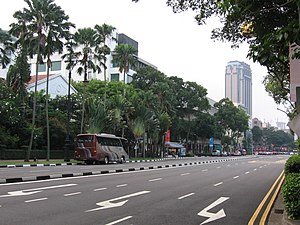 Beach Road is a road located within the planning areas of Kallang, Rochor and the Downtown Core in Singapore.

As its name implies, Beach Road used to run along Singapore’s southern coast, before land reclamation took place in the Kallang Basin area.

Bugis (Kampong Bugis in Malay) is an area in Singapore that covers Bugis Street now located within the Bugis Junction shopping mall.[1][2] Bugis Street was renowned internationally from the 1950s to the 1980s for its nightly gathering of transvestites and transsexuals, a phenomenon that made it one of Singapore’s most notable destinations for foreign visitors during that period.[3][4]

In the mid-1980s, Bugis Street underwent major urban redevelopment into a retail complex of modern shopping malls, restaurants and nightspots mixed with regulated back-alley roadside vendors. Underground digging to construct the Bugis MRT station prior to that also caused the upheaval and termination of the nightly transgender sex bazaar culture, marking the end of a colourful and unique era in Singapore’s history.

Today, the original Bugis Street is now a cobblestoned, relatively wide avenue sandwiched between the buildings of the Bugis Junction shopping complex. On the other hand, the lane presently touted as “Bugis Street” by the Singapore Tourist Promotion Board is actually developed from New Bugis Street, formerly Albert Street, and is billed as “the largest street-shopping location in Singapore”. An attempt by the Singapore Tourist Promotion Board to bring back the former exotic atmosphere was unsuccessful. Although the street is now not a well-known tourist destination, it is frequented by many Singaporeans.

Rochor is a planning area located within the Central Area of the Central Region of Singapore. Rochor shares boundaries with the following planning areas – Kallang to the north and east, Newton to the west, as well as Museum and the Downtown Core to the south.