The Little India area is reported to have developed around a former settlement for Indian convicts. Its location along the Serangoon River originally made it attractive for raising cattle, and trade in livestock was once prominent in the area. Eventually, other economic activity developed, and by the turn of the 20th century, the area began to look like an ethnic Indian neighbourhood. 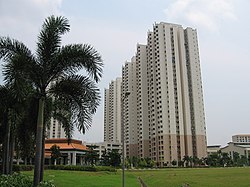 Part of the Rochor planning area as defined by the Urban Redevelopment Authority (URA). Historically, the name “Farrer Park” referred to an open field situated to the west of this subzone. This open field is now commonly known as “Farrer Park Field” and is located within Kallang planning area.

Serangoon (/səræŋɡuːn/) is a planning area and residential town located in the North-East Region of Singapore.